The 2000 NORTHEAST SQUEEZE-IN
-- Onwards into our Second Decade --

Yes, this is most of us pictured here as our event entered its second decade of squeezemongery at the beautiful and bucolic Bucksteep Manor in the hills of western Massachusetts. Weather-wise, it was a lovely weekend which we augmented greatly with our usual activities: the limerick contest, concert, dance, workshops, and ever-changing informal sessions, not to forget general carousing and such....


Between workshops many found their way to the "goodies" room to check out the impressive assortment of enticements for sale. Beyond the The Button Box's usual broad assortment of squeezeboxes, recordings, and books, there was another vendor of (predominantly) piano accordions, and a couple tables laden full with participants' boxes for sale.

This year's Saturday night concert, even more eclectic than usual, featured performances on a diverse array of instruments, including hammered dulcimers, flutes, recorder, bagpipe, nyckelharpa, piano, fiddles, banjos, harmonicas, - oh yes - and lots of squeezeboxes! Nothing unusual about them!

Of course, one of the highlights of the concert was the traditional reading of the limericks and presentation of a most (ahem) coveted prize.... Several of this year's limericks were decidedly political in nature, including the first place taker. 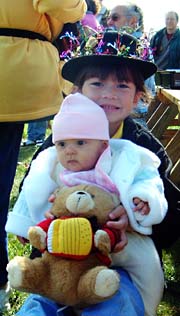 The ensuing lively contradance was followed by waltzes, schottisches, and some swing dancing. While back at Manor - tunes, songs, stories... and somewhere out back an especially welcoming hot tub! The next morning arrived all too soon for the several who awokened at the crack of dawn by a couple of VERY early morning accordionists (whom shall remain unnamed).

Sunday was a day of recovery, coffee and leisurely brunch, some more tunes, a few stray workshops, deciding that you just couldn't pass up that CD/book combo, the group photo, and just hanging out and taking it easy before heading out. Hope to see you all next year!


Back to Recollections  |  NESI HOME