This year's event was rousing and invigorating as usual. Most squeezers must have gotten an early start this year, as almost everyone had arrived by Friday night's dinner. Many a tune and song were had before folks drifted away to their respective beds and bags in the small hours of Saturday morning.

Just over 100 people came to this year's event, with a strong showing of small tykes this time around. Several little squeezers gave high marks to Bob Snope's How to Make an Accordion workshop, which taught participants how to use cardboard, plywood, some reeds and lots of duct tape to construct their own accordions from scratch! True, the little devices were a bit limited in that only the bare essentials of boxdom were attempted, but the young ones had a grand time demonstrating to the rest of us the two tones their instruments could produce. 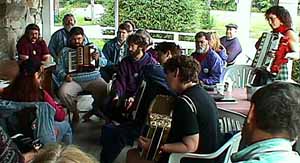 Other workshops included Wendy Morrison's Easy Tunes Played Through Slowly a Hundred Times, Faking Anglo on English, and Fun Things to Do with Your Left Hand; Bob McQuillen and Deanna Stiles's New England Tunes; Ed Marris on Jigs and Reels; Craig Hollingsworth conducting his usual Contradance Repertoire; Rachel Hall leading Some Nifty Eastern European Tunes; and Sylvia Miskoe's Scottish Tunes. And more: Slow Waltzes for Beginners, Morris Tunes, Quebecois Tunes for Everybody, Zydeco and Blues, and the indefatigable Wendy Morrison yet again with a Bellows Workshop on Sunday morning. Despite these "formal" offerings, folks seemed to find time for jamming, hobnobbing, chowing down lunch, and checking out what was available in the Instrument Room. Irish aficionados were noticeably scarce just before Saturday's lunch, as they had congregated in the barn to take in an excellent mini-concert given by Noel Hill.


The Saturday evening concert in the barn was as eclectic and wonderful as ever with just about all the free-reeded instrument types well-represented. Between sets, our judges of this year's contest--the best original limerick including the word "squeeze" and/or other box-related nomenclature--read the winning entry and several honorable mentions and runners-up, some of which we reproduce below. 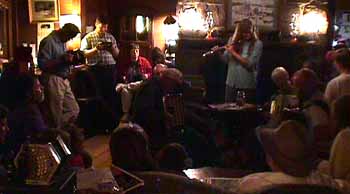 Following the concert was a traditional contradance featuring an all-participant band that sported many instruments in addition to squeezeboxes, with PA player Silvia Miskoe as caller. The dance was followed by a Cajun session and swing dance. Those who chose to seek other genres wandered off to participate in jam sessions elsewhere in the manor house, fortified with midnight munchies, and a song session in the bar, fortified with the usuals; there were also credible reports of creditable singing in the hot tub.

Many woke Sunday morning to the tuneful (re)strains of the earlier risers. It wasn't long, however, before most of us were up, fed, and squeezing away again. The instrument room was particularly popular as the last instrument deals and final decisions on which tapes/CD's/books to take home were made, boxes were entrusted to The Button Box for repairs, and folks took their last looks at the museum table that featured strange squeezeboxes from the 1800's, an assortment of original and reprints of squeezebox literature, and a couple of Button Box anglo concertina prototypes.

All too soon came the call for this year's Group Photo. We all piled up on some picnic tables in front of the Manor house for the cacophonic event. As in past years, the Bucksteep Manor staff were on hand to be the photo-takers in order that all, except for those who were still sleeping or were squeezing somewhere else, could be in the parting shot. See you all next year!